The most popular home improvements in the UK 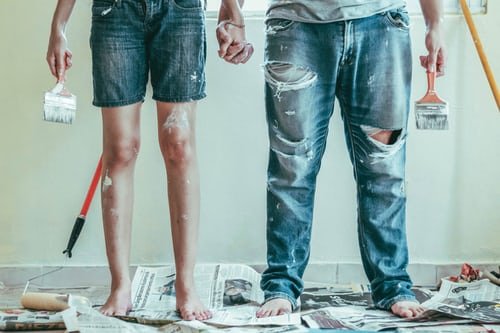 If successive lockdowns have had you reassessing your home and lifestyle, you’re not alone. We look at the home improvements that are in hot demand.

Homeowners focused on increasing their space and improving their gardens during 2020 as successive lockdowns forced people to spend more time at home.

With the housing market closed for business in the early part of the year, many people looked to improve their existing space instead of trading up the property ladder.

Successive lockdowns also led to a significant desire among homeowners to have a better property, particularly as working from home looks likely to become the new normal for many.

Meanwhile, as people spent less money on holidays, entertainment and eating out, they had more spare cash to invest in their property, with the Bank of England estimating households collectively set aside £125bn of extra savings between March and November 2020.

The net result was a 25% jump in the number of planning applications for home improvements submitted in 2020, compared with the five-year average.

Planning applications to develop garages soared by 25.3% during the year, while there was a 7.5% rise in people seeking permission for garden buildings and works.

Meanwhile, planning applications for an extension were up 4.3%, according to research by Barbour ABI.

By contrast, planning applications submitted for conservatories dived by 20.9% year-on-year, while the number of people looking to do a loft conversion fell by 2.3%.

The group said the trends showed that people were not only looking for more space during 2020, but they were also keen to make the best use of the space they had.

Another notable trend was a significant increase in homeowners seeking to install solar panels towards the end of the year, which Barbour ABI attributed to people becoming more conscious of environmental issues during the pandemic, as well as an increased desire to be self-sufficient.

Why is this happening?

Successive lockdowns have led to people spending more time at home, with many people working from home for the first time.

As a result, homeowners have become very focused on making better use of the space they have.

Rather than seeing garages as a place for cars, people were instead viewing them as somewhere to store things to free up space in their home, a place to transform into a home office or even as an extension of their property, according to Barbour ABI.

Lockdowns have also prompted people to reconnect with their gardens, particularly due to the good weather during the first national lockdown.

What are the most popular home improvements?

House prices, population density and outside space all greatly influenced the type of home improvements that were undertaken in different regions of the country.

Building an extension continued to be the most popular type of home improvement, accounting for 81.7% of all planning applications for homes across the UK.

They were most popular in northern regions, many of which saw double-digit increases in planning applications.

This trend is likely to have been driven by the strong house price growth the northern regions have seen in recent years, making building an extension more attractive financially than moving home.

Extensions were followed by garages in the popularity stakes, as people looked to build or convert a garage as a way of expanding their home.

The steep increase in planning applications for garages reversed the previous declining trend. It is likely that in many cases, garages were doubling as a home office or workspace.

While applications for garages rose most in Scotland, big increases were also recorded in the East of England and East Midlands.

Loft conversions were most popular in London and the south east, where they accounted for nearly one in five of all improvement applications.

The group said this is likely to reflect the shortage of garden space homeowners in London may have in which to build an extension, with loft conversions tending to be popular in areas where garden space is at a premium.

At the same time, the higher cost of having a loft conversion done compared with an extension meant house prices needed to be correspondingly higher to justify the work.

Conservatories and garden buildings were most popular in the south west and Wales, possibly reflecting the more rural nature of these regions and the larger gardens of those living there, as well as the popularity of conservatories with retirees.

That said, it should be noted that most conservatory providers offer products with dimensions that do not require planning permission to be installed, so the figures may not reflect the true popularity of conservatories.

The important role played by gardens last year across the whole of Great Britain is reflected by the fact that applications for outside-the-house improvements saw a sizable jump in all regions of the country apart from the north east.

Who are the big spenders?

During the past 15 to 20 years baby boomers have had the biggest impact on home improvements, as this generation not only benefited from high levels of housing wealth, but they also appreciated the value home improvements could add to their property and aspired to live in a home tailored to their own needs.

While those aged between 57 and 75 are still significant home improvement spenders, it is people aged between 30 and 49, an even split of younger generation X and older Millennials, who are now spending the most.

In terms of household type, families with two adults and children are the biggest spenders on home improvements, followed by homes occupied by two retired adults, and those with three or more adults and no children, possibly reflecting the trend for adult children to return to their parent’s home.